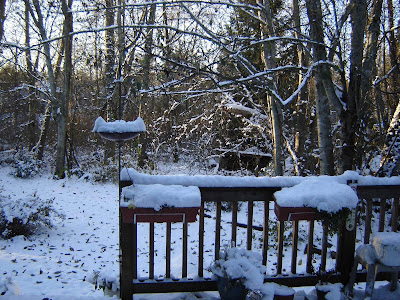 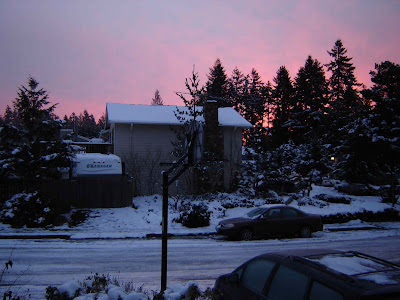 The morning spirits woke me Wednesday morning. I crept quietly down the new stairs and looked out the kitchen window to see the frozen white snow gleaming in the predawn neighborhood lights. I looked at the outdoor thermometer. Brrrrr. It was MINUS 7 degrees Celsius (19.4 degrees). It is much, much colder than normal. I realized that I would not be going to work this morning because the little hill that ascends out of our neighborhood is too icy to safely drive up.
Two nights ago, we were having dinner at a friend's house. When we were driving to her house, Denise pointed out the snow flurries that were barely visibly in the light from the street lamps. We noticed lightening now and then during dinner. When we were getting ready to leave, I looked out the front room window and in amazed disbelief, I saw a boy slid down the middle of the street in a sled. I quickly went and opened the door. WOW, 4+ inches of snow. There was no snow when we drove into the driveway. I was wearing my Birkenstocks. My socks collected white flakes as if they were cool treasures worth keeping.

We scraped the windows and slowly backed out of the driveway being ever so careful not to slide into the truck that was parked directly across from the driveway.

We noticed that the street that we had just driven up two hours earlier was blocked off because it was far to steep to do anything but slide. Then we headed off towards the West only to be confronted with bright red rear break lights from cars fearing to go down the hill. Denise guided me to turn the car around and try a different route.

We drove east a few blocks then turned south. We got about a 1/2 mile before we started to climb a relatively small hill. But we could see that cars had already slid off to the sides. Denise was begging the cars in front of us not to stop. I started to move toward the center of the road in hopes of going around the cars. Then I saw white headlights coming my way, forcing me to give up my plan and move back behind the cars that were almost stopped. I started to slow to a snail's pace, making sure that my wheels kept moving. Try as I did, the van could no longer hold its forward course. It began to slide backwards. I turned my head to assess the situation, lest I make an ass out of myself and crash into one of the abandoned cars. I looked to my left and noticed a ditch beckoning me to slide into its white toothed mouth. I looked to my right and observed a safe curb adjacent to a teasing easily squishable car.

To my surprise, Russian angels showed up, out of the mist. They began to shake the van as it started its downhill slide, forcing it to turn as if it were a stubborn donkey. The van turned perpendicular to the street. Denise was at the point of tears, maybe beyond, as we slid sideways down the road. The angels kept pushing the left front and right rear of the van, in opposite directions as it continued to slide. I turned my wheel downward and when the van was almost parallel with the road, I gingerly compressed the gas pedal. I rolled down the window and said, "Spaceeba." (thank you in Russian) as we drove away, back down the road we came up. Denise was shaken. I was relieved. I told her that I was going to drive back to Debi's
Debi was
delighted that we had returned. I mentioned that when we were kids, we did overnighters with our friends, even if they only live next door. Why did we stop doing such a fun thing when we grow up?
The following day, we left Debi's and drove home, only nine miles away. It took us an hour to drive over the icy roads and through the heavy snail paced traffic.
Celeste was waiting for us. She had been at work, counting ballots until after midnight. Her boss's husband drove his 4 wheel drive
Jeep to bring Celeste and his wife home. It took him almost 3 -1/2 hours to drive 18 miles home. Celeste didn't get to lay her tired bones in her bed until 3:30 AM. Celeste was so tired, pobrecita (poor little thing). Then to add insult to injury, my brother, John's, phone call roused her out of bed at 8:00 AM. He was trying to find me to conference in for a happy belated birthday wish to my brother, Rick. The morning trickster would not let her sleep soundly because she kept getting phone calls from people looking for Denise and I.
I am working from home. Denise and I drove 4 hours to get my lap top. A new
storm was supposed to blow in. So we decided to at least make the attempt to retrieve my lap top so I could work from home in case I became ice bound and unable to get out of the neighborhood.
Posted by MUSHROOM MONTOYA at 12:00 PM