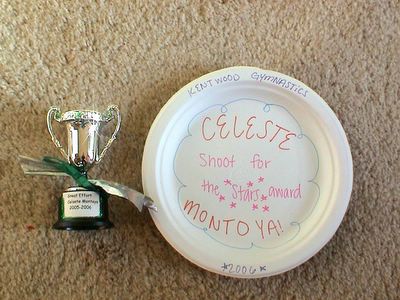 Celeste earns "Shoot for the Stars" gymnastics award from her peers!!!

Posted by MUSHROOM MONTOYA at 8:22 AM No comments:

Celeste earns a letter in Gymnastics

Our Celestial Being brought pride filled tears to my eyes at the gymnastics banquet. When the coach called up the junior varsity girls, Celeste’s face revealed puzzlement and frustration. She had assumed that the coach had forgotten her. And when the coach called up the Varsity team, (those who lettered in gymnastics) and called her name, she was again puzzled. She did not know that she had earned a letter in gymnastics. Then the coach gave her a special coach's award for Great Effort. She said that this was Celeste's first year in high school gymnastics and that no one had put in more effort than Celeste. She tried very hard at everything the coach suggested that she do. But the award that brought me to pride filled tears was the Paper Plate award. The girls have a tradition that they get together (those who have been at it for more than one season) and create special awards for reasons ranging from inspiration to silliness. They gave Celeste the Shooting for the Stars award because she inspired the all of the girls by giving it her all, regardless of the odds. Ah, she inspires me.

Congratulations Celeste!!! You make me so proud to be you dad.

Posted by MUSHROOM MONTOYA at 7:55 AM No comments:

Have a good time 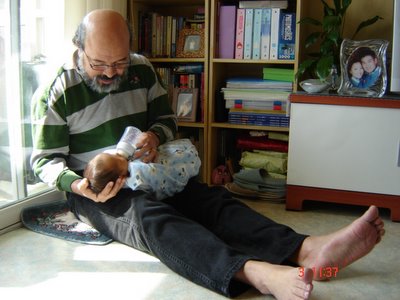 Halabaji Mushroom feeding Tiger in the Korean sunshine. Mushroom is so happy, having a good time, holding his grandson. 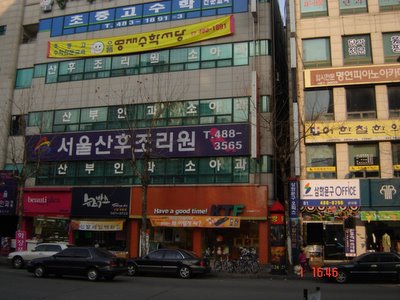 This is where Tiger was born. Look at the 3rd floor, far right, above the 488 and behind the agua (Korean letters). Agua in Spanish is water. Tiger was born under the sign of water. Notice, too, the orange sign that reads, "Have a good time."
Posted by MUSHROOM MONTOYA at 4:38 PM No comments: 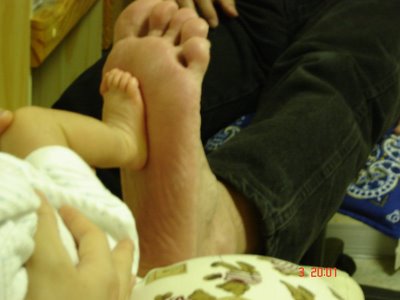 Tiger puts his foot against his Halabaji Mushroom's foot 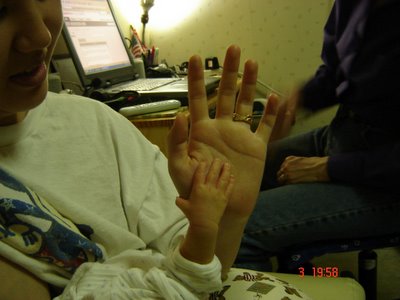 Edan holding onto Bonnie's hand.
Posted by MUSHROOM MONTOYA at 4:28 PM No comments: