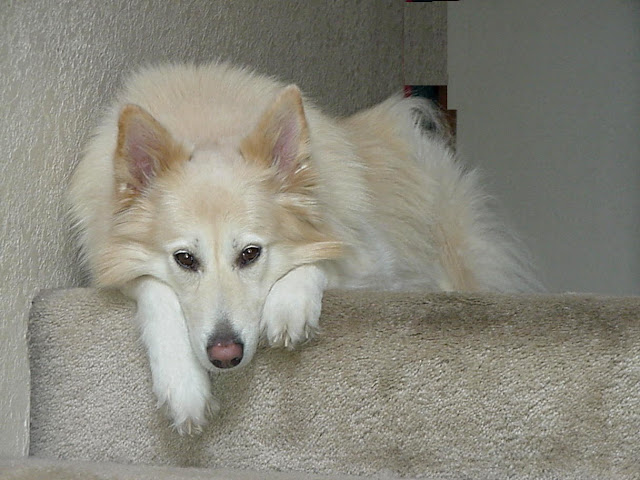 Soon after we moved to Kent, Washington, the Great NorthWET, we adopted Kita.  She was part wolf, German Shepard and Akita.  She was my running partner.  She ran as far as 16 miles with me on one of my practice runs.  She loved playing and sitting in the snow.  She was our family protector and playmate.  We all miss her.  She grew old and happy. 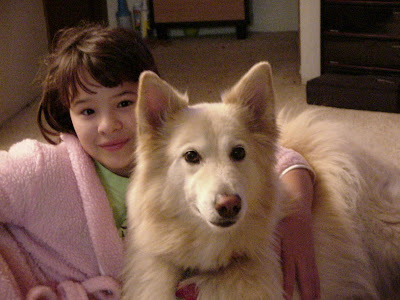 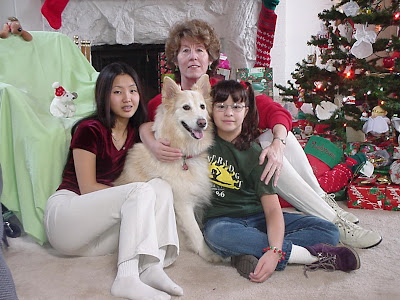 She even had her own Xmas stocking.
Posted by MUSHROOM MONTOYA at 11:12 AM No comments: 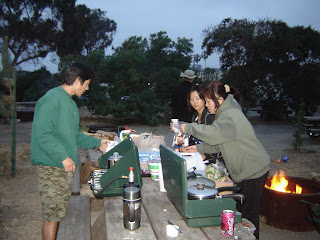 We went camping at Doheney Beach at Dana Point with Dana, Sun Hong, Max, Bonnie, Jiho, Tigerboy, Isis, Celeste and me.  Denise stayed home to take care of her mom, Eda Bea.  The next day, Celeste went to work and I went home to take care of Eda Bea.  Denise took her turn and got to go camping too.
Celeste built the fire.  She loves building fires. 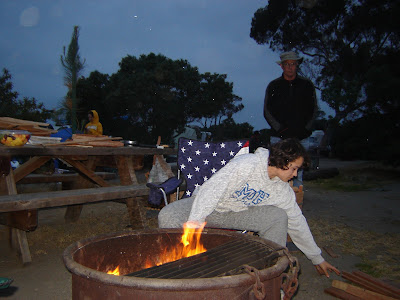 That allows us to keep warm 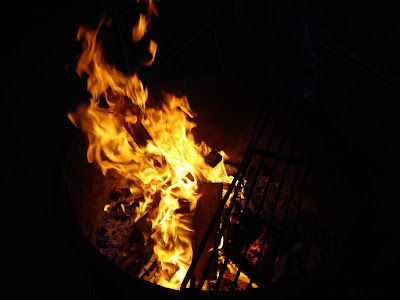 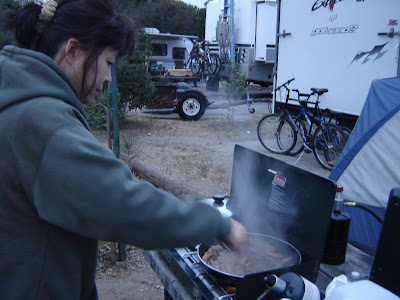 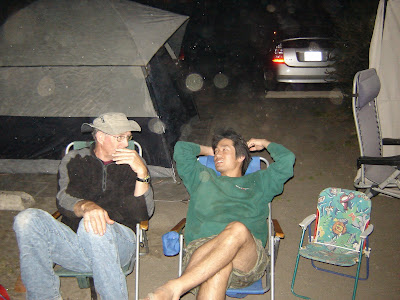 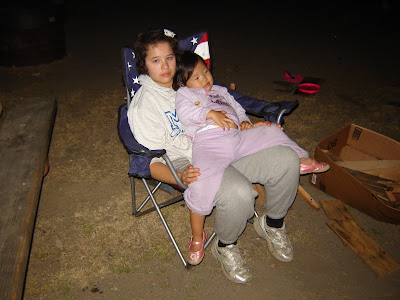 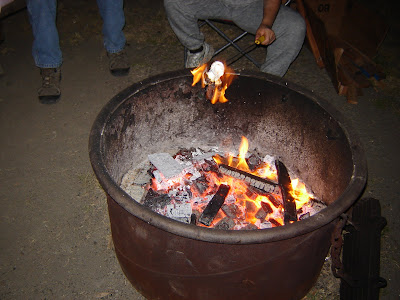 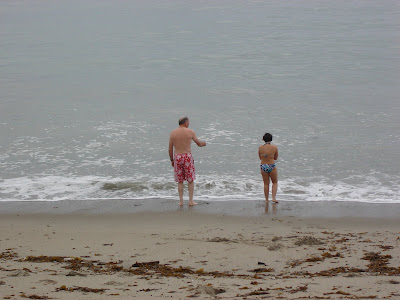 Uncle Dana tries to talk his niece, Celeste into going in first. 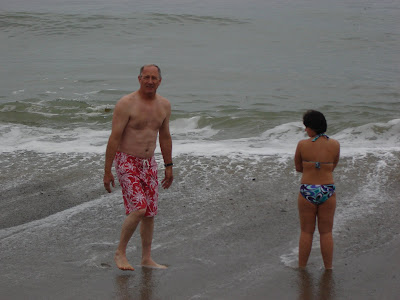 Then uncle Dana calls for Mushroom to come in. 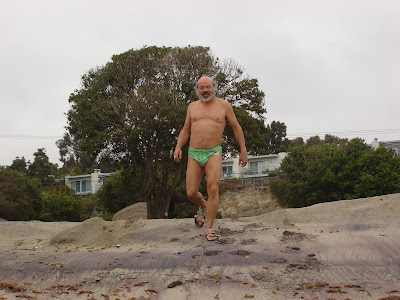 So Mushroom comes down to the beach in his "Peace" Speedos. OK, Now who is going to go in first? 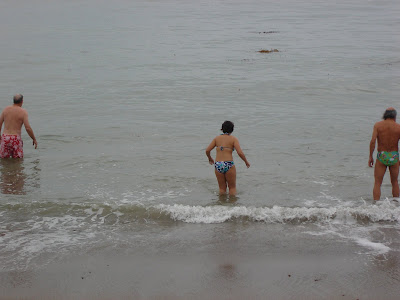 Let's all go together! 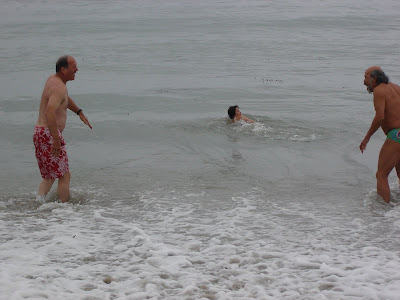 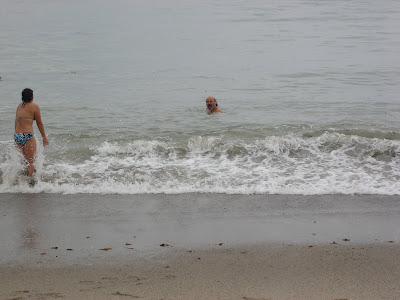 Who's dumb idea was this, Dana? 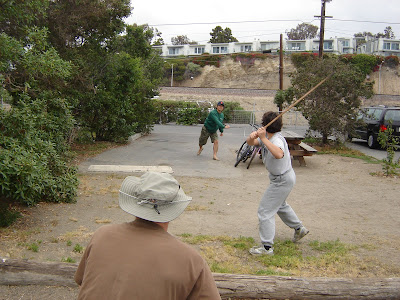 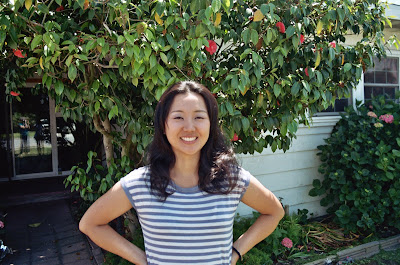 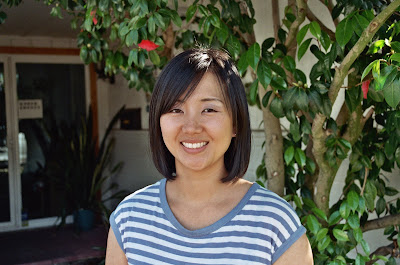 Isis wanted to look pretty too, albeit with a beard and mustasche 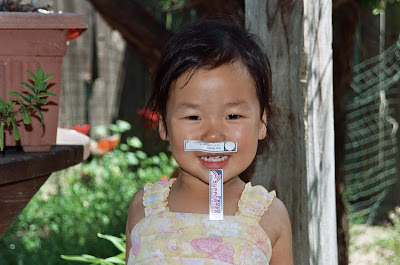 Celeste got a make over.  I love our little Ruski 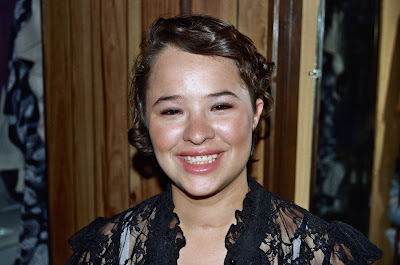 Tigerboy was busy decorating a cupcake 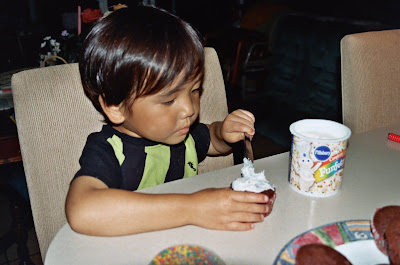 Isis wanted to decorate a cupcake too 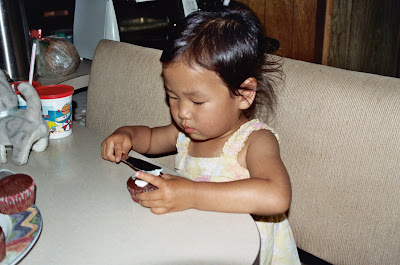 Then Tigerboy got to eat his creation! 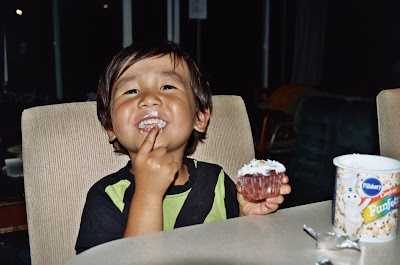 Posted by MUSHROOM MONTOYA at 7:55 PM No comments:

Uncle George died last night on the 10th day of May 2010.  He was surrounded by those who loved him. 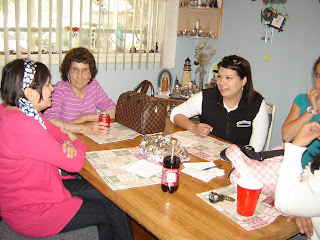 They came from near (all around Salt Lake City, Utah) and from far away. 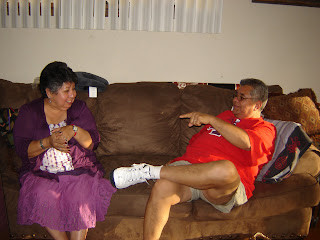 Brenda, his daughter, along with many others attended to her dad. 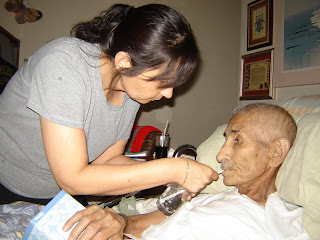 Uncle George was 73 years old.  He was my mother's little brother.

I flew to Salt Lake City to wish my Uncle Farewell and to assist him on his last journey.  When I saw him laying in his bed, those who were gathered around told me that he could hear everything, even if he seemed to be sleeping.  I smiled broadly, exclaiming, "Hey! Uncle George, You look like Mahatma Gandhi!"  There was a laughter and someone jokingly asked George, if he should punch me.  But he did look my Mahatma Gandhi.  And, to me, that was a good sign.
Uncle George lived with us for a short while when I was in grammar school.  He was my  little league baseball coach.;-) My mother loved her little George very much.  She was connected to him on a soul level.  One day, when I was about 12 years old, my mother exclaimed, "O Dios Mio!  Something happened to George!"  We were living in our little house on Spaulding Street in Long Beach, California.  Her brow was furrowed with little gullies filled with worry. She made a long distance call to Salt Lake City.  To her surprise, George answered the phone. "George! Are you OK?", she pleaded!  She knew something was wrong.  George replied, "I'm OK, but I just watched Florinda get hit by a bus across the street."  My mother instantly felt her little brother's shock 830 miles away.
I helped Uncle George cross over "into the Light".  I did what can be called, a pyschopomp journey.  The term Psychopomp come from Ancient Greek mythology:  As a crosser of boundaries, Hermes Psychopompos' ("conductor of the soul") was a psychopomp, meaning he brought newly-dead souls to the Underworld and Hades.
I entered into a shamanic trance, while riding the sounds of my didgeridoo, and entered the lower world.  I went to the place where souls of the dead and dying wait.  Uncle George was happy to see me as I entered the cave.  He opened a 3 panel map and pointed to different locations on the map.  Then he folded it and placed it into my shirt pocket.  He directed me to give it to Brenda.  While I was pondering how I was going to accomplish his request,  George, told me to tell his sister, Elsie, that he loved her tortillas and the way that she always looked after him.
George shrunk small enough to jump on my back and tell me he was ready.  I took my cloak and hid him from view.  As I passed through the cave's opening, I gave the gate keeper a crystal.  With great haste, I passed the Gate Keeper and entered a boat.  The boat sailed across the canal.  I jumped out and climbed the wall on the other side. Once we were safely on the other side, I flew into the Upper World.  The flight was long and fast. During my flight,  I called on George's parents to meet him on the other side. After they agreed, I made the same request to "CALL" (his sisters: Cleo, Amy, Lucia and Lourdes).  We arrived at the gateway.  I watched it open.  To my delight and surprise, it was my son who was opening the gateway.  A very bright light illuminated everything as the gateway revealed those inside.  George climbed off of my back and walked into the hugs of those that awaited him.  He was uncontainably happy.  The gateway closed.  I turned around, contemplating and enjoying what had just taken place.  George was in his heaven with his parents and older sisters (except for Elsie). His great nephew, Jeremy, opened the gateway for him.  Yes, George is happy and he is "home".
Posted by MUSHROOM MONTOYA at 6:52 PM No comments: