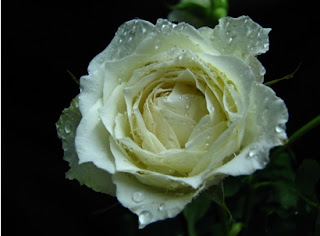 Sunny mornings are rare in October, in the Great Northwest. Thirty miles southeast of Seattle, clouds drizzle millions of water droplets on a normal autumn day. The seventeenth of October, 1992 turned out to be an abnormally warm and sunny day. The brown and yellow leaves of the alder trees littered our backyard lawn. The lingering water droplets from the previous night's rain glittered on the leaves, reflecting the unusual October sunshine. A flock of geese flew overhead, reminding me of the autumn migration of cranes in New Mexico, the Land of Enchantment.

After my morning run, my neighbor came over to chat about the roses that were still blooming. When she told me that her white rose bush was in full bloom, I told her that white roses symbolize death. They represent our own mortality with their lack of pigment without which they can't color our world.

On that unusually sunny seventeenth of October, 1992, we received a phone call that all parents dread when their children are away. Our son, Jeremy, was a University of New Mexico student, living fourteen hundred miles from home. A nurse from the University of New Mexico Hospital trauma unit was on the other end of the phone asking for permission to provide medical care for our son. He had sustained a severe head injury from a motorcycle accident.

We granted permission and immediately made arrangements to fly to Albuquerque. Our plane landed in the early morning hours. Having spent the day at the hospital, we made our way to a friend's house that evening. She told us that we could stay with her as long as we needed.

Leaving for the hospital, the following morning, I walked out of her front door and noticed a beautiful white rose bush in full bloom, growing in front of friend's home. The pit of my stomach dropped when I saw a few petals at the base of the rose bush. I stopped and stared at the rose and its petals, as much for its beauty, as for its message. The rose was telling me that our first born child would die from his injuries. I walked to the car, not wanting to see or think about the white rose bush anymore.

I drove to the hospital, a little too fast, trying to erase the image of the white rose bush from my mind. I wished it had not been growing at the entrance of our friend's home. But every morning, on our way out the door, on our way to the hospital, I would see the white rose bush. Each morning more white petals collected at its base. Their whiteness blemished brown and yellow as their vibrancy bled out into the dry New Mexico air. I stopped each day, acknowledging the rose and silently pleading with it to stop dropping its petals. I didn't want to see its warning signs that were telling me that our son was dying. Every morning fewer petals lived in the bloom and more lay dead and dying on the ground.

On the seventh day, as I walked out of the front door, I tried not to look. But I couldn't stop myself. My shoulder slumped as tears began to flow over my cheeks. All of the white petals had fallen on the ground and the flowers were no more.

My feet felt heavy as I walked to the car. My mind's eye could only see the white rose petals decaying on the ground. We drove in silence to the hospital. A little before midnight, Jeremy, our first born son, died. The white rose petals gave their life, showing me what my ears were too terrified to hear.

Like the handsome white rose blossom, our handsome grown son spent his last days giving us a last chance to admire him and say good-bye. Jeremy died, leaving behind his body, that was still beautiful and still vital. And like the white rose bush, Jeremy had other branches, his organs. We honored Jeremy's wish to donate his organs thereby giving a new lease on life to many people.

The white rose no longer serves as a warning, telling me of impending doom. Rather it reminds me of the gift of life that our son gave to so many. And yet, when I see a white rose, I cry a few tears for Jeremy.
Posted by MUSHROOM MONTOYA at 7:18 PM